In order to assess the sea ice situation in the MOSAiC starting region, multiple types of information are required. This information is provided by satellite observations, which record various sea ice parameters, allowing a better estimate of the sea ice situation in the area. The most important parameters include sea ice concentration, ice drift and the general condition of the ice surface, and data on these are supplied by three different satellite products: 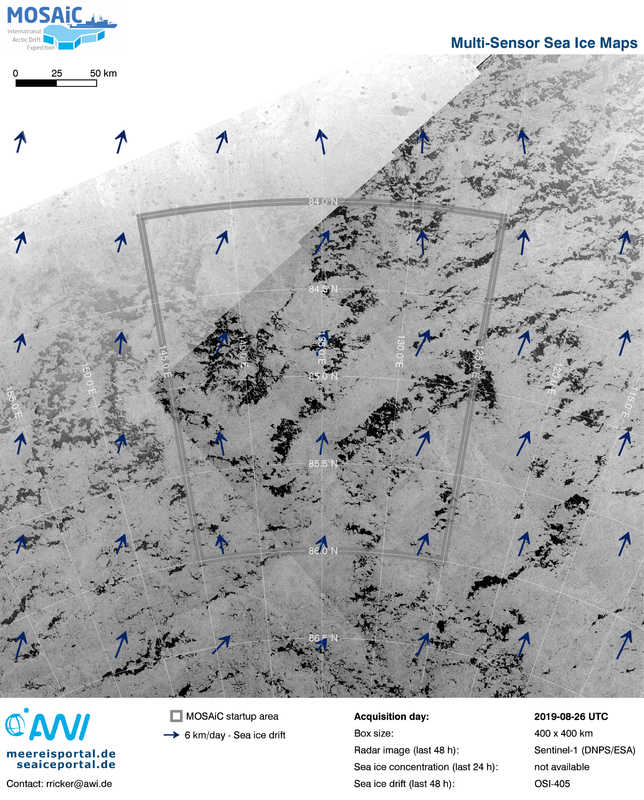 The radar satellite images from Sentinel-1 have a resolution of 50 m, making it possible to observe the characteristics of the sea ice surface in detail. However, due to ambiguities, the radar images can’t always be clearly interpreted. Very dark areas (little backscattering) indicate either open water (in calm conditions) or young ice. Light, or very light areas (a lot of backscattering) suggest that the surface is rough, which means either that there is older sea ice or that open sea has been stirred up by the wind. The degree of backscattering allows conclusions to be drawn about the roughness of the surface. On closer examination, individual sea-ice floes and leads can be identified. 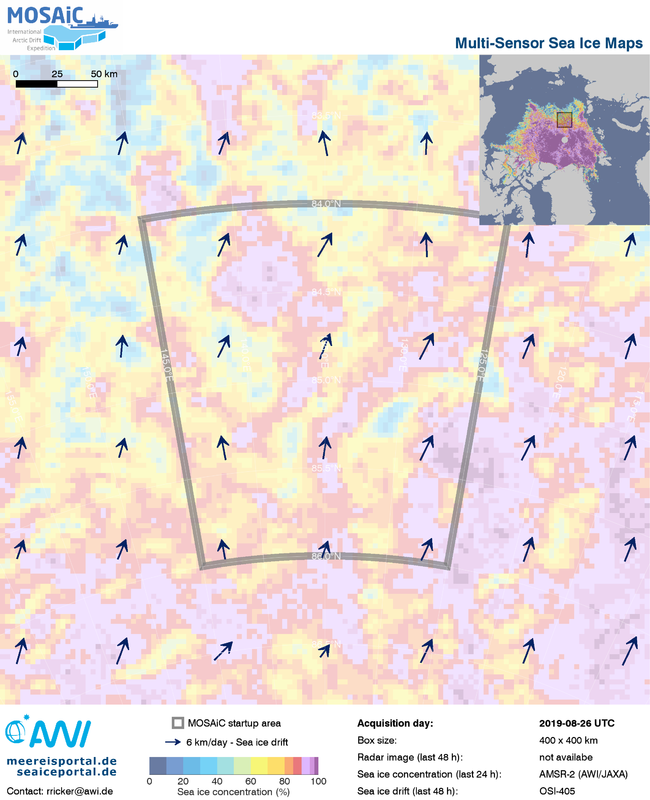 Ice concentration, derived from data from the passive microwave radiometer AMSR2, indicates what percentage of the surface in a given area is covered by sea ice. This information, which is colour coded and displayed as semi-transparent areas on the map, is available with a resolution of 3 km. For more information on the sea ice concentration product, see the following paper:
Beitsch, A.; Kaleschke, L. and Kern, S. (2014), Investigating High-Resolution AMSR2 Sea Ice Concentrations during the February 2013 Fracture Event in the Beaufort Sea. Remote Sensing, 6, 3841-3856, doi:10.3390/rs6053841. 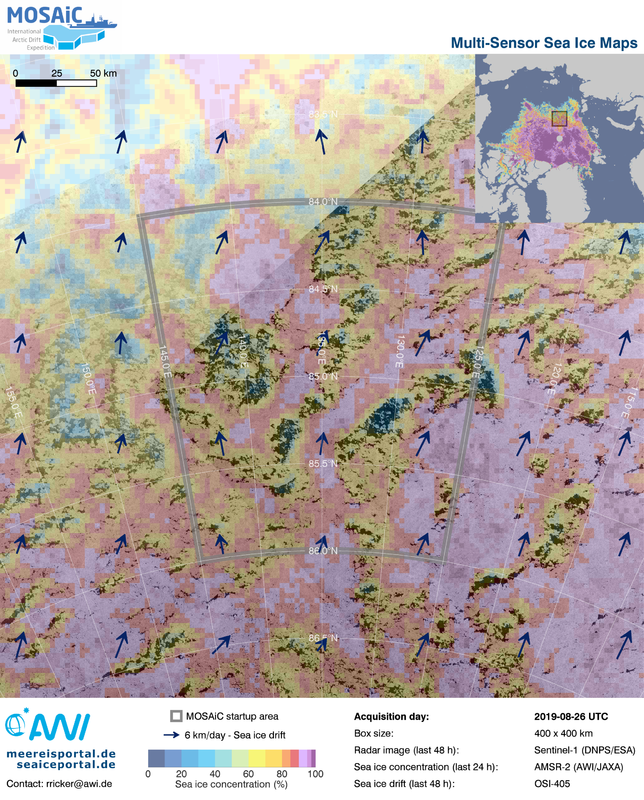 Ice drift is estimated using a correlation method based on time-delayed satellite data. It shows the velocity at which the sea ice has moved over the last 48 hours. The information is presented with vector arrows, which vary in length according to the speed and indicate the direction of ice movement.

In order to present all this information in real time and in a compressed form, an automatic service has been set up, which creates two daily maps.

Since high-resolution satellite images are not always available for the entire map section, the coverage is irregular, and this is reflected in the figures. The section on the top right shows the location of the map detail in the Arctic.

Before the actual MOSAiC Drift begins, a daily map showing the likely starting region (grey box) will be created. As soon as the research vessel RV Polarstern enters this area, her position there will be shown. Once a suitable ice floe has been found, the ice camp has been set up and the year-long drift has begun, the map section will move along with the RV Polarstern.

This work has been funded by the Helmholtz Climate Initiative REKLIM (Regional Climate Change), a joint research project of the Helmholtz Association of German research centres.

In case of questions or any difficulties, please contact us at: Meereisportal Team.